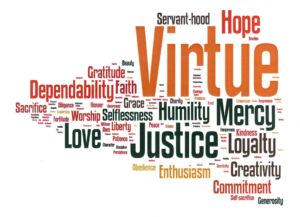 We are often told that altruism and empathy make you feel good.

Helping others is widely asserted as the path to happiness.

But how does that fit with the fact that happy chemicals are the brain’s reward for meeting a survival need?
Many people are convinced that VIRTUE only  is the source of happiness, so they refuse to accept the individual reward-seeking nature of our brain.

In my opinion, the two views (individual and others) are easy to reconcile.

Virtue helps you get long-term rewards that you’d miss if you always yielded to short-term rewards.

Conclusion: Virtue is simply the habit of focusing on long-term rewards which have positive impact on the environment.

But that’s not enough for true believers in the virtue paradigm. They reject the very concept of rewards and insist that their brain only cares about higher values.  They think the brain cannot be focused on meeting its own needs because that would be selfish.

It’s important to know how the „virtue paradigm“ actually harms the greater good.

You may not notice the virtue paradigm in the same way that a fish doesn’t notice water.

You may not question the virtue paradigm because you fear getting excommunicated by your virtuous colleagues.

So you accept the belief that selflessness is our natural default state, even though it ignores basic biology.

Let’s look closer at the biology that the virtue paradigm filters out.

The brain releases dopamine when you find a new reward. We like “new and improved” because dopamine makes it feel good. This sounds like bad values, so believers in the virtue paradigm simply reject it. They explain it away by insisting that corporations have gotten control of your dopamine. They disempower you instead of teaching you to manage your impulses. That view is alarmingly popular. Blaming society is more fun than taking responsibility for your brain.

Our brain releases oxytocin when we feel protected by others. Oxytocin motivates a lone gazelle to run toward the herd when it smells a predator. This promotes the gazelle’s survival, even as it endangers others. Virtue believers think social bonds are pure altruism, and ignore the selfish motives in social interactions. They think that you can get your oxytocin by loving everyone and expecting everyone to love you. When that doesn’t work out, they condemn society for being “uncaring.” Before you waste your life condemning society, check out the biology. Even a mother’s love is selfish in the sense that she is protecting the survival of her genes. If you expect the adult world to nurture you like a child, you will be disappointed. In adulthood, we must offer protection to others in order to receive it.

The brain releases serotonin when you feel stronger than the monkey next to you. This fact is deeply offensive to virtue believers. They want you to stimulate serotonin with a hot bath. That can work for a few minutes as you lock everyone else out of the bathroom, but it doesn’t help you navigate a world in which seven billion others want to be top monkey. If you can’t acknowledge your own urge to be special, you resent that urge in others. You believe that others are putting you down because you can’t see that you are trying to put yourself up. Thus, the virtue paradigm creates conflict instead of appeasing it.

You may not think the brain should work this way, but this is how it works. Fortunately, you can be virtuous and still enjoy happy chemicals for short-term rewards. It takes the hard work of resisting immediate rewards and steering yourself toward long-term rewards.

I sympathize with the urge for virtue, but we need to understand reality in order to navigate it.

Follow me!
FLOW is the spin-off of a 4-phase day cycle.