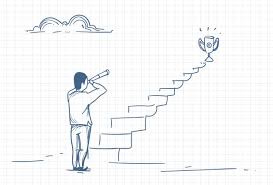 High-performing leaders, transformational workers, and entrepreneurs have a few things in common:

1. They have a valid vision for changing the world in a meaningful way

2. They have the skills, experience, and expertise to make their vision a reality

But there’s also a third thing most of the visionaries I’ve encountered have in common:

3. They are often inconsistent in their ability to execute and see their vision through (from start-to-finish).

This means that their good intentions––while valid and vetted and backed by a solid skillset––are left unfulfilled.

Now, along the way, any given visionary might create a lot of value (even if they fail to fully launch their dream or attain their goal).

But consider the tragedy here:

There are countless visionaries who have a plan and the skills… and yet the good they could, should, would give simply doesn’t happen.

Why does this happen?

What holds back the would-be world-changers and the well-intentioned visionaries?

Doesn’t it seem a given that if you have the mission and you have the skills, barring some tragedy, you would make it happen?

It’s not for a lack of vision.

It’s not for a lack of skill.

It’s not even for a lack of time (though sometimes this can happen).

The culprit is often the lack of clear goals.

Clear goals, as you’ll see, are how you translate your big vision into boots on the ground.

While „high, hard goals“ are our longer missions, the ones that can take years to achieve. They’re the big steps toward our big dreams, such as „ I want to write a book or become a doctor or start a company „—these are all high, hard goals.

Clear goals are the inverse.

They’re all the tiny, daily steps it takes to accomplish that mission.

They exist over much smaller timescales.

Becoming a great writer is a massively transformative purpose, or a goal to aim for over a lifetime. Writing a novel is the next level down, a high, hard goal that could take years to complete.

So what does this look like in the real world? Daily „to-do“ lists.

A proper to-do list is just a set of clear goals for your day.

At a very basic level, this is exactly what the road to impossible looks like—a well-crafted daily to-do list, executed daily.

A clear goal is a tiny mission.

Once accomplished, you get the dopamine reward on the other side, which cements your desire to get after it tomorrow. Stacking little wins atop little wins is always the road toward victory.

The state requires focus, and clear goals tell us where and when to put our attention. When goals are clear, the mind doesn’t have to wonder about what to do or what to do next—it already knows.

In a sense, clear goals act as a priority list for the brain, lowering cognitive load and telling the system where to expend its energy.

Applying this idea in our daily life means breaking tasks into bite-sized chunks and setting goals accordingly. Think challenging, yet manageable—just enough stimulation to shortcut attention into the now, not enough stress to pull you back out again.

A proper clear goal sits right inside your challenge-skill sweet spot, meaning it’s hard enough to stretch you to the edge of your abilities, but not hard enough to push you beyond, into that demotivating realm of anxiety and overwhelm.

When it comes to writing up your daily to-do lists, try to write the next day’s list at the end of the previous day. That way, you can get after it the moment you get to work.

Personally, I limit the number of items on my to-do lists to around eight—which is my maximum capacity for a good day’s work. In other words, on any given day, I have the energy to push myself into that challenge-skills sweet spot eight times.

So I don’t try for nine or ten or eleven, because then I’m overloaded. Nor do I shirk the work, and try for six or seven.

Figure out what works best for you. Conduct your own experiment. Track how many things you can do in a day and still be your best at all of them.

Do this every day for a few weeks and you’ll light upon the magic number. That’s how many items you should put on your daily list of clear goals. By getting this right, we maximize motivation. But we also know when to declare the day a success.

This is how clear goals become high, hard achievements, which become milestones on the way to massively transformative purposes.

So tell me… what are your clear goals?

Do you know what really drives you and how do you get to the next level ? By...
Nach oben scrollen