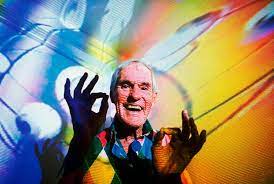 In the 1960s, Leary’s admonition became the slogan for American counterculture.

As he later explained in his autobiography, there was much more to his words than the perceived invitation to get high and stop being productive.

‘Turn on’ meant become sensitive to the many and various levels of state of consciousness and the specific triggers that engage them.

‘Tune in’ meant interact harmoniously with the world around you.

‘Drop out’ suggested an active, selective, graceful process of detachment from involuntary or unconscious commitments.

The third recommendation was an invitation to break free from those cultural things that were blinding his generation and preventing them from living up to their potential.

It’s a matter of rejecting what limits us and and choosing to consciously live life on our own terms.

Looking around at where our culture is headed today, the case can be made for a contemporary counterculture movement that takes a similar approach – albeit with different goals. It’s a matter of rejecting what limits us and and choosing to consciously live life on our own terms.

A person who chooses to “TURN ON” today is someone who refuses to become numbed by the various substances, technology and messages that seek to make us into mindless consumers and compliant drones. This is especially true of our political systems.

One of the greatest benefits of this willful consciousness has been becoming more aware of all the things in my life that have nothing to do with the artificial strife of politics. Of all the addictions that plague our society today, our dependency on politics has to be one of the worst.

It has literally driven those who are dependent upon it to a type of madness where angry hooting has replaced reasoned discourse as the preferred method of communication. Social media is the virtual crack house in which this particular poison can be obtained at any hour.

It’s astonishing how many people get caught up in the false notion that the only things that really matter are based in whatever is currently being reported in mass media. By refusing to take my daily dread supplement, I’m finding that the world outside of political posturing is a much more rational place.

I’m also experiencing a lot less disappointment than my friends who have invested a majority of their faith in a process that disingenuously promises solutions yet only delivers more problems.

These days, a person who chooses to “TUNE IN” will understand there is more to our world than materialism and will adjust their values to reflect this truth. What they own will be of lesser importance than how they treat others.

They will champion the individual while seeking ways to help others without dominating them.

Man is an individual being. Man is also a social being. His material success – even his existence – depends on the progress of others. Yet, man’s fortunes and existence depend also on himself. In some respects he is tied to others, but in most respects he must be freed from others.

The key distinction here is that our ties ought to be voluntary rather than compulsory.

By tuning in and synchronizing to the world around me, I’ve rediscovered how many truly decent people are within my orbit. I notice and appreciate the innumerable acts of personal service and selflessness that are taking place – most often without any kind of public recognition.

The risks and dangers of the world have not disappeared. However, they have been placed in their proper perspective, which, it turns out, is far less than what our fear-based culture would have us believe.

Finally, to “DROP OUT” in our day, means to consciously break free of those aspects of our culture that seek to manipulate us for some nebulous “greater good.” Those who seek to control us love to foment conflict, distrust, prejudice and indecency.

By deliberately limiting their influence in our lives, we become friction against their designs.

This is more than simply rugged individualism; it’s a commitment to overcoming the evils of our time with personal goodness, truth and grit. In our time, that’s what counterculture looks like.

When any culture tries to make participation in its decline mandatory, we have a duty to resist.