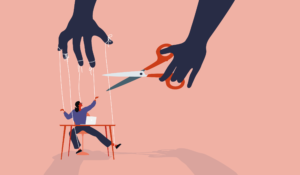 In 1977, when Edward Deci and Richard Ryan were both young psychologists at the University of Rochester, they bumped into each other on campus.

Deci had just become a clinical practitioner, and Ryan was still a grad student.

Assessments were binary: a person either had the right amount of motivation for the job or they didn’t.

Psychologists also viewed this motivational energy as a singular characteristic.

So they tested their ideas in a head-to-head competition.

Very quickly they discovered that intrinsic motivation (a term that is synonymous with drive) is much more effective than extrinsic motivation in every situation excluding those where our basic needs haven’t been met.

If you’ve been seduced, coerced, or otherwise pressured into doing something—that’s controlled motivation. It’s a job you have to do.

Deci and Ryan discovered that in every situation autonomous motivation throttles controlled motivation.

In fact, in many situations, controlled motivation doesn’t produce the desired results.When pressured into action, people routinely look for shortcuts.

The example Deci likes to give here is Enron.

The energy company decided that the best way to motivate its employees was to give the best performers stock options—an example of motivation by seduction.

But people quickly figured out that the best way to get those bonuses was to artificially inflate stock prices, committing corporate fraud and ultimately bankrupting the company.

The history of Enron is often retold as a cautionary tale of greed and hubris, but it’s really a story about how the wrong motivation can easily produce the wrong behaviors.

According to Deci and Ryan, we’re tapping autonomy correctly when we’re doing what we’re doing because of “interest and enjoyment” and because “it aligns with our core beliefs and values.”

Put differently, the seeking system likes to be in charge of exactly what kinds of resources it’s seeking.

Another thing Deci and Ryan discovered is that autonomy turns us into a much more effective version of ourselves.

The boost in neurochemistry provided by autonomy increases our drive, of course, but it also amplifies a host of additional skills.

Optimize for autonomy as much as possible. Your biology will thank you for it.

I wish you LIGHT & FLOW.

Follow me!
Wha to do if you have no mojo (motivation)