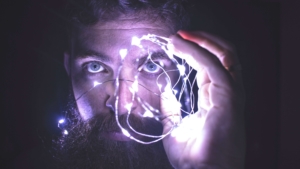 When it comes to the topic of creativity, two facts are clear…

First, it tops nearly every „Twenty First Century Skills“ list ever made.

The skills our children need to thrive in the future?

According to the Partnership for 21st Century Skills—a collection of 250 researchers at 60 institutions—creativity.

The quality most desirable in a CEO?

According to a global survey conducted by IBM of 1500 top executives in 60 countries, creativity is again the answer.

But in light of this first fact, the second fact is far more troubling— we still have no real idea how to train people to be more creative.

But „flow states“ change this equation—though this will take some explanation.

As you likely know by now, technically, flow is defined as an „optimal state of consciousness where we feel our best and perform our best.“

In flow, concentration becomes so laser-focused that everything else falls away.

Time dilates—meaning it slows down (like the freeze frame of a car crash) or speeds up (and five hours pass by in five minutes).

And throughout, all aspects of performance are incredibly heightened—and that includes creative performance.

This last bit is no understatement. In a recent study run in Australia, 40 research subjects were presented with an exceptionally tricky brain teaser—the kind that requires deep creative insight to solve.

No one solved it.

But when flow was induced artificially (using transcranial magnetic stimulation), 23 subjects got the answer right and in record time.

Most importantly, Harvard’s Teresa Amiable discovered that not only are people more creative in flow, they also report being more creative the day after a flow state—suggesting that flow doesn’t just heighten creativity in the moment, it heightens it over the long haul.

In other words, being in flow actually trains us to be more creative.

How this all works comes down to neurobiology.

Flow is the product of profound changes in standard brain function.

In the state, our brainwaves move from the fast-moving beta wave of normal waking consciousness down to the far slower borderline between alpha and theta waves.

Alpha is associated with day-dreaming mode—when we can slip from thought to thought without much internal resistance.

Theta, meanwhile, only shows up during REM or just before we fall asleep, in that hypnagogic gap where ideas combine in truly radical ways.

Since creativity is always recombinatory—the product of novel information bumping into old thoughts to create something startling new—being able to slip between thoughts quickly and combine them wildly enhances creativity at a very fundamental level.

But brainwaves are only the beginning of this discussion.

Flow is also caused by „transient hypofrontality“— the temporary deactivation of the prefrontal cortex.

The PFC is the part of our brain that houses most of our higher cognitive functions.

Why does our sense of self disappear in flow?

Because self is generated by large portions of the prefrontal cortex and with large swatches of this area no longer open for business, that sense vanishes completely.

This has huge consequences for creativity.

For example, during flow, the dorsolateral prefrontal cortex—the part of the brain charged with self-monitoring and impulse control—goes quiet.

The DLPFC is our inner critic, that voice of doubt and disparagement.

As a result, with this area deactivated, we’re far less critical and far more courageous, both augmenting our ability to imagine new possibilities and share those possibilities with the world.

Lastly, during flow, the brain releases an enormous cascade of neurochemistry.

All are pleasure-inducing, performance-enhancing chemicals with considerable impacts on creativity.

Both norepinephrine and dopamine amp up focus, boosting imaginative possibilities by helping us gather more information.

They also lower signal-to-noise ratios, increasing pattern recognition or our ability to link ideas together in new ways.

Anandamide, meanwhile, increases lateral thinking—meaning it expands the size of the database searched by the pattern recognition system.

Taken together, these neurochemical, neuroelectrical and neuroanatomical changes in brain function provide us with an exceptionally potent workaround for the problem of teaching people how to be more creative.

Instead of having to come at this thorny problem head on, we can instead train up people’s ability to find flow and the state’s neurobiology takes care of the rest.

I wish you enlightenment and flow,

Follow me!
TACTICAL EMPATHY – the magic door to the soul of your conversation pa...