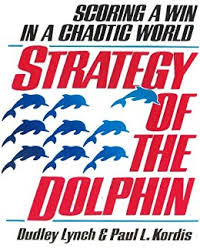 This book was first published in GB in 1988 and only in 1991 copies were available in German Language. A pity….

The concepts are very similar that the ones taught in Transactional Analysis (win/win Vs win/lose Vs lose/lose) but I find the approach of this theme in that book  much more inspiring and even much more “human” and “healthy”. Dolphins in fact do not mind losing “if it makes sense” or making others lose “if they really insist.”

REMEMBER : This is not a book urging business people to behave like animals. All references to animals are metaphorical…..

Consider the natural characteristics of the carp, the shark, and the dolphin, and see what parallels – and lessons – can be drawn for how man behaves in organization and in the world at large :

THE CARP : Although the common carp is an important food source in some countries, its lifestyle means that is equally often viewed with disdain. It likes to make its home in unappealing waters; it has a tendency to muddy the bottom waters as it feeds, uprooting the natural vegetation and driving out other native fish; it breeds prolifically and indiscriminately.

THE SHARK : When surprised or attacked by a vulnerable food source the shark usually attacks using deadly teeth that can remain embedded in its victim. Sharks will eat virtually anything, including their own kind. In “feeding frenzies”, large numbers of sharks will rush to the same bait, whirling, snapping and ripping viciously, bloodying each other as well as the food source. Shark behavior is frequently reflexive. Sharks are easily fooled.

THE DOLPHIN : With a brain that is as large, or larger than the human brain, the dolphin is perhaps the foremost example of animal intelligence. Dolphins are inventive, playful, sensitive and responsive. They are skilled communicators. They adapt their behavior quickly, precisely and ingeniously to make sure that they get what they want. Dolphins thrive in all seas and oceans of the world, alone or in large schools. Dolphins welcome a challenge that requires them to do something new and different.

This books is about a powerful new strategy : one that has sprung full blown of late from a brain that understands that the world has changed and therefore so must we.

What we must change is the quality and quantity of our awareness of complexity and our skills and comfort level in working with it.

Persons who utilize only the strategy of the carp suffer from a blinding hypnosis – an inability to acknowledge and accept as real very crucial aspects of the world at large.

People who are habituated to the strategy of the shark and originally motivated by pleasure in the long run become motivated by the avoidance of pain. Living and doing business as we do in environments with closer and closer tolerances, we find their excessive adrenaline and intolerance of comity and flexibility to be increasingly irritable if not outright dangerous.

The “old” brain offers us the proverbial “three Fs” Fight, Flight or Freeze.

A carp (that is a person using the carp strategy) uses only Flight or Freeze.

Usually the strategy of the shark is viewed as a strategy intended to produce a personal win, whatever the cost. When you must swim in the vicinity of sharks, the rules are pretty clear :

“Real” Dolphins are some of the” most prized creatures of the deep. We can suspect that they are very intelligent, perhaps in their own way more intelligent than we Homo Sapiens. ……

Dolphins behavior around sharks is legendary …. Using their intelligence and their wiles, they can be deadly to sharks. Bite them to death ?? Oh no. Dolphins circle and ram, circle and ram. Using their bulbous noses as amphibious bludgeons, they methodically crush the shark’s “rib rage” until the murderous creature sinks helplessly to the bottom. But rather than its skills at combat, we have chosen the dolphin to symbolize our thoughts on coping and choice-making in rapid-change times because of the mammal’s abilities to think constructively and creatively.

The strategy of the dolphin requires that we think about how we think.

With a twist of the mental and emotional kaleidoscopie, the dolphin (human variety), changes the nature, the rules, perhaps even the playing surface and the players themselves. Dolphins enjoy, exploit, explore and experience to the fullest of their faculties the ability of the integrated, highly social, fully involved human brain to second-guess itself and other brains in advance. The result is often an ocean of ideas. A maelstrom of possibilities. An awakening of potential.. A suddenly visible way out of the shark pool so stunning that it is the mantel equal to a punch in the solar plexus.

The strategy of the dolphin has a way of spooking other people sacred cows.

Where we find thoughts, feelings, actions, and intuitions that bring together people and resources elegantly, we find circumstances and situations that are attractive to dolphins

Our personal and organizational universes can be very different, depending on what we believe.

Carps and sharks believe that we live in a world of scarcity – that there is only so much to go around and since we are always in danger of running out, what we have and how much of it we can have very much depend in our behaving in structure, predictable ways

“Co-dependents (carps) spend most of their time understanding the needs of others and picking up subtle cues about what others want from them. At the same time they are astute observers. They intuitively know what responses are required in most situations, and they give them. Their impression management disguises a wide-ranging dishonesty that is experienced by others as niceness, righteousness and unlimited capacity for understanding and listening. Co-dependents will rarely come right out and tell you what they want. They are experts at vagueness, manipulation, rumor and gossip… Culturally, the co-dependent looks like the loving, giving person, yet as we work with co-dependents we find that underneath their composed exterior, they are frequently angry, depressed and extremely controlling and manipulative” – Abstract from the Addictive Organization by Anne Wilson Schaef and Diane Fassel.

Because they believe in scarcity carps and sharks believe that their survival is a result of their behaviors…. Carps play Get-out and Give-in, Sharks play Takeover and Trade-off. When confronted with the need to change, they characteristically “burrow” deeper into those behaviors.

At all times if so allowed, play the infinite game offers the present the perspective of a new beginning and a new ending. Therefore, in every encounter, in every situation, the dolphin is always thinking about how he and others are thinking, knowing that nothing is more tellingly reflective of which kind of game we are playing.

Follow me!
Back from the future to the present – how to apply REVERSE ENGINEERING...

HOTIFY YOUR TEDx-TALK: 5 key rules to be nominated as a TED-Talk speaker
Nach oben scrollen