In my LinkedIn’s article „The World Treat You as You train the to“ I offered at the end a checklist for a self-assessment of work satisfaction. 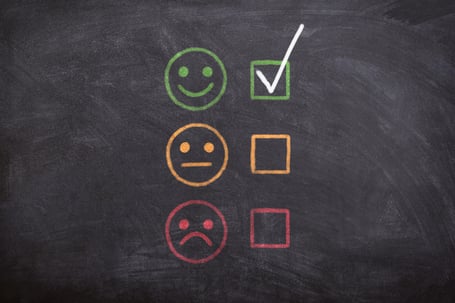 It’s widely known that when employees are satisfied with their jobs, they’re much more likely to be happy, more engaged, and more productive. Since successful companies are built on the backs of satisfied and motivated employees, it would seem like a no-brainer that organizations would care deeply about employee satisfaction.

Apparently, that’s not the case.

Believe it or not, many people in the world hate their job, according to Gallup’s World Poll. There are many reasons why that might be the case. Some employees hate their bosses. Others hate their coworkers, while still others simply feel disconnected to the team. There are those who feel as though their hard work is never recognized. Some workers feel expendable. Others believe they’re underpaid. And even others don’t believe in their company’s mission or how it treats its staff.

When employees aren’t satisfied with their jobs, organizations suffer in a number of ways. Here are some of them:

So, what questions should you regularly ask yourself to check your satisfaction at work? Let’s take a look:

01. Do you enjoy your company’s culture?

According to the 2019 Employee Engagement Report, the invisible company culture reigns supreme. The top factors related to employee happiness turn out to be the intangible ones: interpersonal relationships, culture, and work environment. If you don’t like your culture, make your propositions on how to improve the corporate values and culture, working together with your line manager and the HR department.

02. Do you find your work meaningful?

In a recent survey, millennials indicated that the ability to tackle meaningful work was just as important as salary when considering where to work. If you don’t find your work meaningful, you are unlikely to be engaged.

03. Does our company offer you adequate opportunities for promotions and career development?

Many of today’s workers care a great deal about having opportunities to climb the corporate ladder and otherwise develop in their careers. Yet, according to a research, only one in three people strongly agree that they have the opportunity to reach their full potential at their organization. If you don’t support career growth, you will not be happy on the long term.

04. Do you feel valued for your contributions?

Many Engagement Reports world-wide revealed that in average only a small percentage of workers feel as though their employers recognize their hard work on a consistent basis.

05. Does your company give you the tools and technologies you need to do your job well?

Work is not fun, when you’re forced daily to rely on outdated tools and legacy technology to tackle your workload.

06. Do your superiors communicate company news effectively and in a timely manner?

Employees spend at least 40 hours — if not many more — at the (home) office each week. That being the case, it’s only fair that superiors clue them in on major developments that take place. Nobody likes being blindsided by important news that affects their jobs. If management is unable to communicate effectively, employees will not be satisfied.

07. Do you feel as though your job responsibilities are clearly defined?

When employees were asked by means of surveys, if their promotion and career path were clear to them, more than half of them said ‘no’. When you don’t know what’s expected of you, it’s impossible to succeed. When roles are not clearly defined, there is a lot of confusion — which can be demotivating enough on its own.

08. Do you think that work is distributed evenly across your team?

According to these survey many workers believe there’s not enough time in the week to get all of their work done. It’s one thing if everyone on the team is overworked. It’s quite another if certain members have work piled on them while others do not.

09. Do you feel connected to your coworkers?

Coworkers are the number one thing employees like about their jobs. However, according to several Engagement Reports, only a few number of employees feel connected to their colleagues. It’s impossible for employees to be truly satisfied at work when they don’t have any friends at the office.

10. Do you feel like your job utilizes your skills and abilities as much as it could?

It’s extremely difficult for employees to be satisfied when they feel as though their employers are ignoring their strongest skills. If you don’t feel like your talents are being fully leveraged, have an open and transparent coversation with your line manager in a way that se/he starts encouraging to pursue pet projects and collaborate with colleagues in other departments.

11. Does management seem invested in the success of you and your team?

If you perceive that management is just there to boss people around and collect a paycheck, there’s no chance you’ll be satisfied or motivated.

12. Do your managers value your feedback?

Just because you are not senior-level managers doesn’t mean you don’t have fantastic ideas of your own. It’s disheartening to work for someone who never asks for your opinion or ideas. If you are never asked to give your feedback, chances are you’re not satisfied on the long run.

13. How transparent do you feel the management is?

May surveys show that while managers strongly agree that management within their organization is transparent, only a small percentage of employees feel the same way.

14. How open to change is your organization?

You’ll only feel valued and be motivated to provide feedback if you know you opinions are going to make an impact to your organization.

After having answered these relevant 15 questions for a quick self-assessment of your satisfaction in your work environment (within your 6 months of your probation period and/or at the end of 1 12 months cycle) you should have a good feeling, if..

1) you are „at the right place“
2) you need to change something which is important for you (e.g. speaking with your line manager and addressing these topics personally)
3) you should better move on..looking for a different company.

Enter your email address on the landing page of this website to receive my newsletters:

Follow me!
50 FLOW TRIGGERS TO CREATE THE FUTURE YOU WANT AND STAY YOUNG FOREVER